This little Sugar Glider (Petaurus breviceps) was found at Eucumbene in January, stuck in a chimney. She was hungry, thirsty and lethargic but after a couple of days with a LAOKO carer, she was ready to be released back to where she was found.

The property owner is planning on putting some wire netting over the top of the chimney to prevent another possum falling in again.

Sugar gliders live in trees and glide between them using flaps of skin between their front and back legs. Adults are about 15cm long, about the size of a rat, and weigh around 150 grams. They can live for up to 7 years.

These bundles of flying fur tend to mate in June or July. The female will give birth to two babies, each of which are independent by about ten months of age.

They are social animals and will share their nest (a tree hollow) with several adult gliders as well as their young. When warning off predators, they make a series of shrill barks. 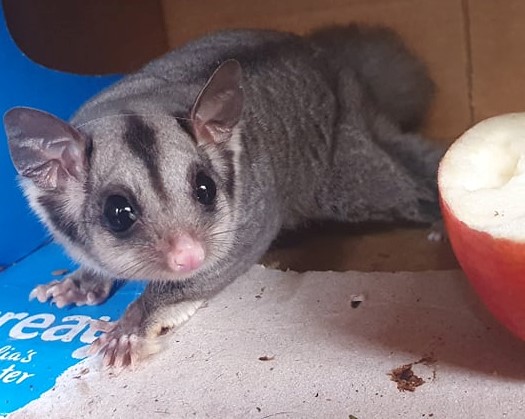 Gliders live first in the pouch, then the nest for nearly four months, before starting flying lessons around January. They begin with little jumps along a branch, before graduating to longer hops to other branches below.

Theys prefer bush with an understorey of wattles; these have sap that gliders love. They also eat wattle seeds, nectar, pollen and insects like grasshoppers.

Sugar gliders have a twin membrane that stretches from their little finger to their hind legs. When fully stretched out in flight. these membranes act as a wing or parachute, enabling them to glide across open areas in the trees. They also have another use for these membrane wings: they use them as pockets to collect food in to take back to their young.

Sugar gliders can travel up to a kilometre through open country to reach other forests and other glider communities. They are thought to commute along electricity lines and fences, and will stop off at any tree along the way. A single tree, left standing in a paddock or backyard, can potentially provide a vital breeding link between one isolated glider colony and another.

There are many types of gliding possums, from tiny feathertail gliders that are the size of a small mouse, to the almost cat-sized greater gliders.