Hi Angela! You love reptiles a lot! Why?

When I was little, my parents got me a turtle. It was called Myrtle… Myrtle the turtle. That’s how it started!

How did you begin in wildlife care?

Years later my son found a turtle in our backyard in Cooma, and I helped him take care of it. My son took that turtle everywhere, entering it in Cooma Show where it won prizes for best fancy dress and most unusual pet!

Tell us about one of your most interesting experiences with LAOKO.

I once tackled a crocodile… in Cooma! About five years ago I received a phone call from the police who informed me they had a crocodile that needed to be dealt with, and I thought they must have been pulling my leg! I drove to Zalka Heights and several cars were there. Several people were standing in someone’s front yard and there it was… this crocodile! I thought, what will I do, I’ve never caught a crocodile before. The police asked how I would catch it… well I just did it. Then I said, “Just like this!”

It was maybe a metre and a half long. But whose crocodile was this?? I rang the reptile park in Canberra hoping they would take it but it was a weekend, so they couldn’t take it until the following Monday. So now I was stuck with this croc. Later that day, I remembered that Cooma Show was on, and wondered if it belonged to the man doing the reptile display there. I phoned and he was absolutely frantic. Lovely fella from QLD. I took him his crocodile and he was so relieved. The newspaper came and took photos.

So you might be wondering how it got all the way to Zalka Heights, did it walk there?? This man was staying in a motel up there. He noticed the croc was dry – which they shouldn’t be – so he put it in the shower of the motel. Turns out the croc just walked out of the shower and straight out the door.

When did you become a LAOKO volunteer? 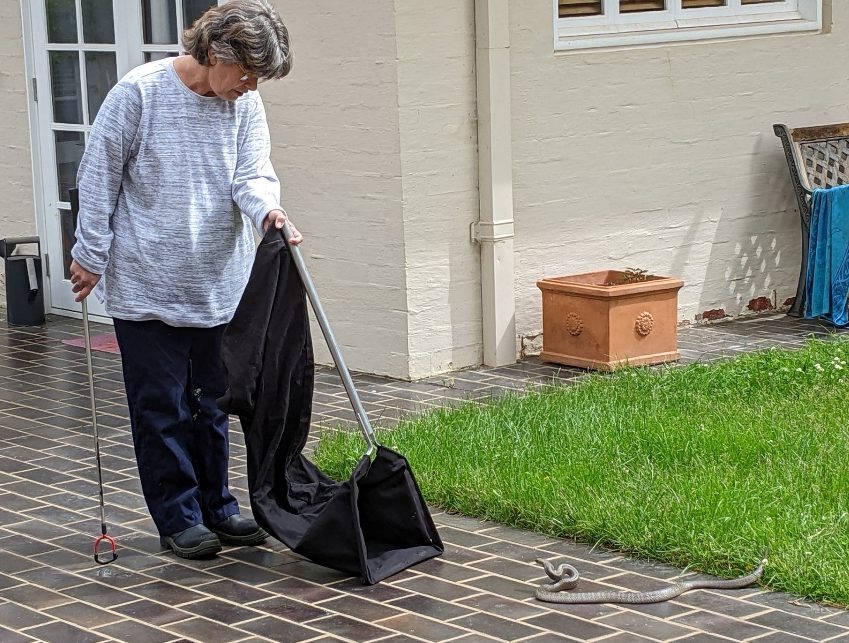 Angela Barns volunteers as a snake catcher with LAOKO, and is also our Snake & Reptile Coordinator, which entails overseeing all the reptiles that are currently in care.
Photo courtesy: Angela Barns

What is your favourite reptile?

A bearded dragon: they’re an amazing animal with a mind of their own. ‘Aurora’ came into care three or four years ago and now lives in my bedroom! When she came into care, I wasn’t able to get the full backstory on her, but she was a captive bred lizard, and therefore not suitable for release into the wild. Bearded dragons are not native to our region either, and this is another reason they are not suitable for release here. And so, Aurora’s become my pet. When I first received her, she was freezing cold. I took her home and when I put her on my loungeroom floor she went straight to the heater. They have a lot of variety in their diet – crickets, mealworms, cockroaches, fruit… but her favourite food is defrosted green peas! 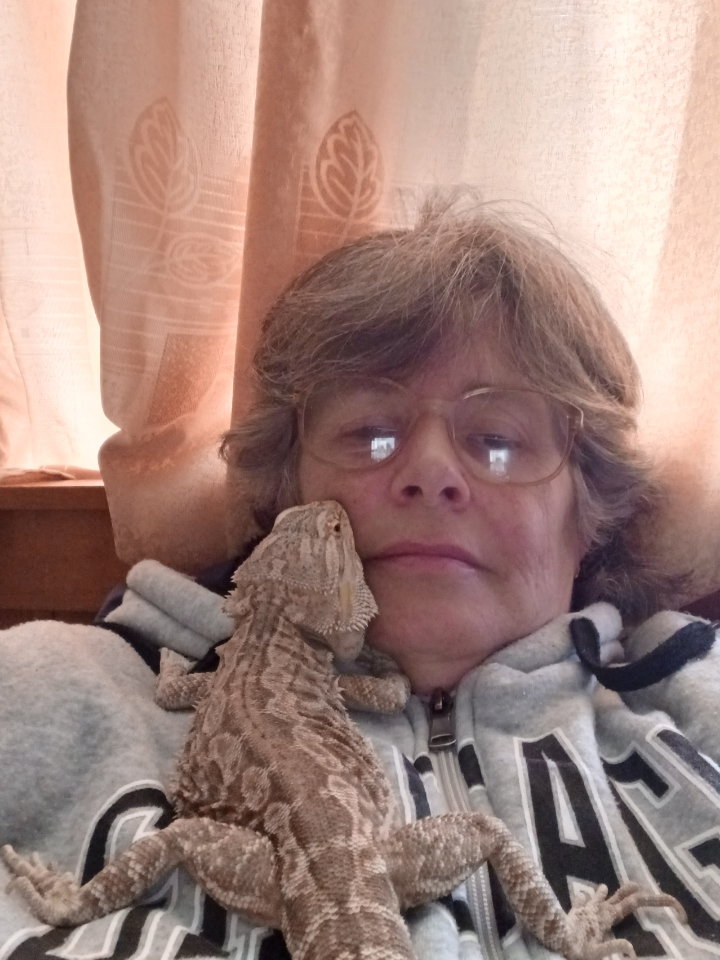 What are some of the rarest species of reptiles in the Snowies?

The Cunningham skink (Egernia cunninghami) is quite rare – I’ve only ever come across it once here, on a lady’s property near the Murrumbidgee. They occur right up the Great Dividing Range, have a spiny tail and love hanging out in the sun.

Which reptiles most commonly come into care?

Mostly turtles and lizards. Blue-tongued lizards are the most common rescues, and mainly because dogs get hold of them and bite into them. Same with snakes: dog bites.

I occasionally have a snake in care. I recall one on a property on West St, Cooma during a bout of freezing weather. It would be unusual for a snake not to move away when you went near it, but this one stayed put. I thought it might be just sunning itself since cold-blooded animals need sun to digest food. But when I went to catch it, it reared up then fell backwards. I had it in care until it looked well again. We’re only allowed to keep a snake a couple of weeks: it if gets better it is released; if not, it must be euthanased according to protocol. No vet in our area can treat a venomous snake. And every snake in our region is venomous: we don’t have pythons here.

How do you communicate with people about reptiles?

I did a talk recently with the kids at Adaminaby Public School. I also spoke at Cooma Multicultural Centre on snakes, to help people who have migrated here learn more about what type of snakes we have. Education on reptiles is important to me. If I can get people to realise that snakes aren’t here to hurt us, hopefully snakes will have a chance.

Do you have any words of advice for people concerning reptiles?

Don’t use snail bait in your garden! This can make blue-tongued lizards very sick and while some can make it, many die. Not only do lizards die, so do birds.

What are some of the reasons reptiles come into care?

Well, one time, a blue-tongue was brought in covered in tar from roadwork in Cooma. The task for the vet  was to continuously rub baby oil into its skin and patiently pick all the bits of tar off. I continued this process once it came into my care, and was eventually able to release it when it was fully clean again.

During the bushfires, I had 18 blue-tongued lizards. Some had small burns on them. One of them gave birth in my care to about five or six babies. I had 100% success with every reptile that came into my care during the bushfires; I am very proud of this.

I received a bearded dragon the other day, but they’re not native to here! He had an injury under his eye, perhaps from a bird. I thought, is this someone’s pet? Based on his grey colour, I figured he had to be wild. I asked the lady if she had anyone visit her property recently from somewhere else, but the answer was no. So now I’m stuck with this bearded dragon because we can’t release it here! Fortunately I love bearded dragons!