As the weather warms up, snake season is upon us again. We talk all about snakes with LAOKO’s Snake & Reptile Coordinator, Angela Barns (Jones).

Angela, what are the most common snakes in our region?

Eastern brown snakes are by far the most common here in the Snowy Monaro region. There are red-bellied black snakes too, but not many. Once you get out of Cooma and into surrounding areas, you see tiger snakes: they like wet areas like rivers because they like to eat frogs.

Are all of these snakes venomous?

All of the snakes that inhabit the Snowy Monaro are venomous, with Eastern browns being the most venomous here. Don’t forget, even babies are highly venomous. Baby browns are generally born with black stripes or a black stripe across the nape of their neck, but vary widely in colour. I’ve seen one that was mostly black, and one that was bright orange. A baby is more dangerous than an adult because it doesn’t know how to hold its venom.

Adults, on the other hand, have learned how to hold their venom for things they are actually going to eat. Many adult snakes will actually have a ‘dry bite’; that is, they will bite without injecting venom. BUT that’s not always the case!! AND you certainly don’t want to risk it! Besides, even a dry bite can be extremely painful and land you in hospital for an extended period. You should assume all bites will be highly venomous and subsequently deadly. 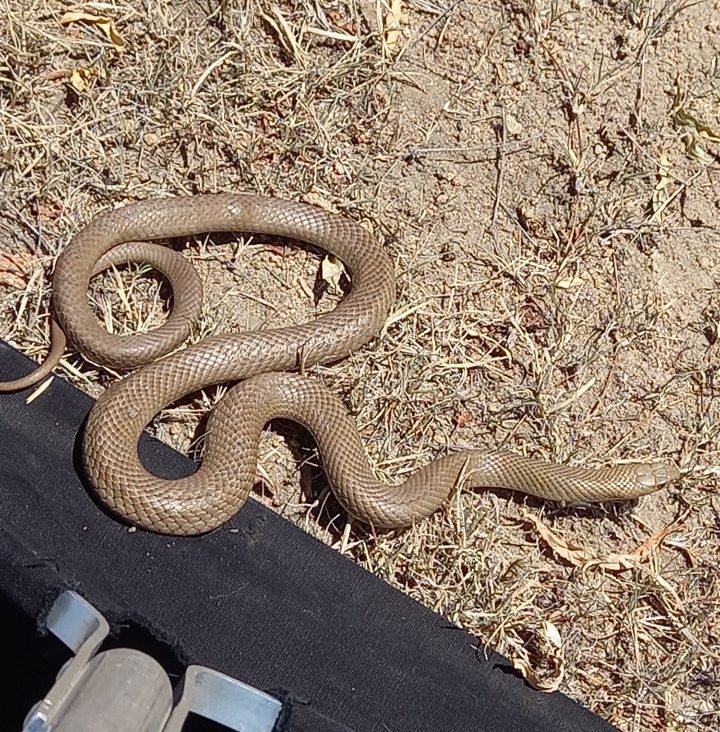 Eastern brown snakes can vary widely in colour, from brown to black (and even orange). Photo: Angela Barns

When are they most active?

Breeding season is now: from the end of October through to March. Snakes are also active at this time because they’re out looking for food. Snakes hibernate all winter, so they must hunt and eat in the spring and summer. During their hibernation period, a snake can actually survive up to seven months without food.

Snakes are mainly active in the mornings or late evenings. In the middle of the day it’s generally too hot for them. But in this bout of mild weather, you just don’t know when a snake will be out and about.

What should I do if I encounter a snake around my home?

If you are right near a snake, stand very still until it passes. I know this sounds hard, but try to stay calm. Just stay still like a tree until it passes. It’s not going to bite in that instance. They don’t want to hurt you. But they will defend themselves if needed.

I have a paralysing fear of snakes. What can I do to allay that fear?

You can do a course with Wildcare Queanbeyan which is open to anyone. The course is usually run in November/December with both theory and practical aspects. They actually use ‘real snakes’ that have been caught for relocation: these snakes are utilised for the course and then released back into the wild. During the course, you are given several protocols to ensure you will not get bitten. This includes solid footwear: fangs are only 3-5mm long so it is difficult for a snake to get through a good pair of boots. Loose pants are also mandatory, because it’s harder for snakes to bite your skin if your clothes are not tightly fit. Your hands are protected through the use of a snake bag and snake stick. If you stick to what you were taught in the course, you will not get bitten when you have to handle a snake.

And a final word on that – don’t put your hand down a hole! There’s nothing you can really do to encourage a snake out of a hole, and instead you will be bitten.

I love snakes so much – they’re amazing creatures! I understand why they’re here and what they do: we need them for our ecosystem. Snakes eat mice, for example, which helps keep the mouse population down. I also like working with snakes because I want to help people stay safe.

Snakes are not here to hurt us. You might think they look that way in some situations, but they are merely protecting themselves or their young. They actually don’t have very good eyesight, and they don’t have ears. They go by vibration mostly, through their jaw. As they move they keep their mouth to the ground, flicking their tongue to taste things and follow their prey.

Red-bellied black snakes and copperheads are actually quite placid. They will turn around and take off.
In 200 years there hasn’t been a single recorded death from a red belly. A brown, on the other hand, will ‘strike first and think later’. It will stand up for itself.

If you cut off a snake’s head, the snake will continue to live for 24hrs. In my opinion, that is just terrible for the welfare of the snake.

I’ve been called the ‘crazy snake lady’, the snake whisperer, and a ‘very brave person’!

If you see a snake

If you spot a snake, stay well clear and leave it alone (please don’t try to contain or kill it – this is when people get bitten) and move yourself (and others including pets) to a safe area, then call LAOKO on 02 6456 1313 for assistance. At a safe distance, keep an eye on the snake so our snake catcher will be able to find it. If it can still be found, our snake catcher will capture the snake and release it to an appropriate location. This location will be far away so that the snake will not return to your premises.

How to treat snakebite

If you suspect you’ve been bitten by a snake – even if you can’t see evidence of the bite – keep calm and follow these steps:

Download this fact sheet from St John Ambulance on how to treat snake bite. Keep it somewhere handy where you can see it this summer.

If your pet has been bitten by a snake

If you suspect an animal has been bitten by a snake, don’t wait: take it to a vet. Your pet might look like they’ve come good, but a while later it may go downhill again and die. You won’t necessarily find a bite mark on them, because snake fangs are very small. 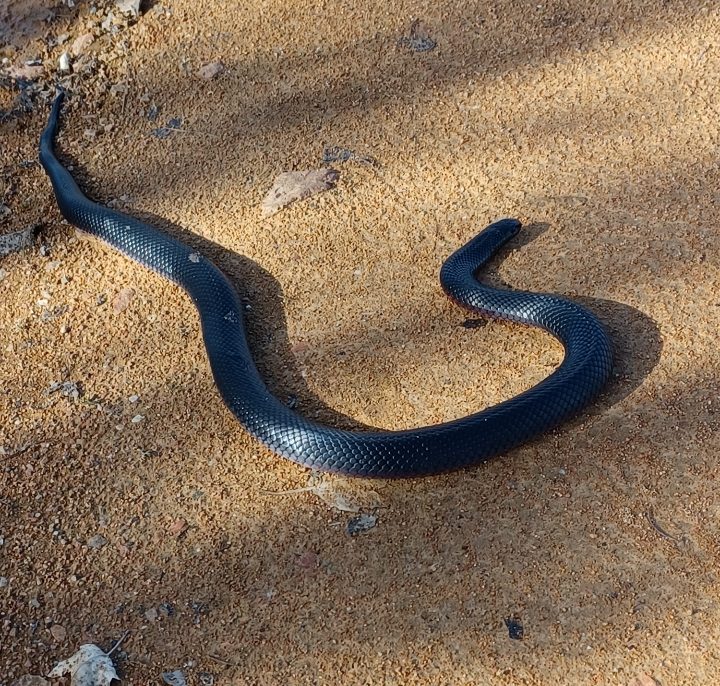