Back in January, a wombat was hit by a car on the Tantawangalo Mountain Road, between the mountains and the coast. She was severely injured and had to be euthanased by one of our trained volunteers.

Afterwards, when checked, it was evident that the wombat had been shot near her spine, which would have disabled her prior to being hit by the car. When checking her pouch for young, an elongated teat was evident, indicating she was still feeding a young joey, who may be nearby or left by the mother in the chamber of a nearby burrow while she foraged for food.

SMWR (LAOKO) is aware of a number of reports of wombats being illegally shot in this area near Bombala. It is illegal to shoot wombats without a permit from the NSW National Parks and Wildlife Services. It is also an offence, even with a permit, to shoot wildlife and not ensure their immediate and humane death.

Often young at-heel joeys are also hit by a car that kills the mother as they walk so closely to her, barely breaking contact. But in this case, despite evidence of suckling, no joey was found.

And so the search for her orphaned joey was commenced by LAOKO members Heather and Ross Brown, who searched daily on a ‘grid walk’, also using a camera to help find the joey.

Cameras were set up on a nearby burrow, and the joey wombat was seen going in and out, looking very hesitant and lost. He  was too small, about 5kg, to be on his own, since wombat joeys stay with their mothers until they are about 11 or 15 kilograms in size. But it was clear that Rossco was also using other burrows, as there would be breaks of 3 weeks where he did not appear on the camera. 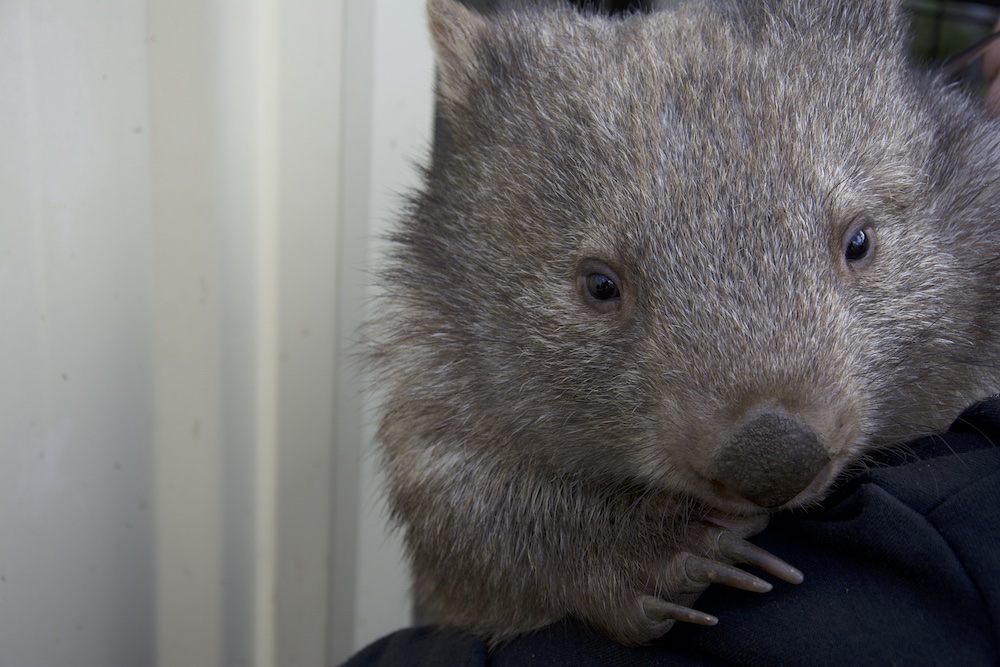 Rossco is doing much better in the hands of one of our trained SMWR (LAOKO) carers.

After some weeks, the camera picked up that the joey had been attacked by other wombats, with attack wounds on his back.

Heather and Ross were about to finally give up the search when, 8 weeks to the day, about 3pm, they made a successful rescue. They found him sleeping in front of a burrow, and a quick-acting Ross placed a net in front of it as the baby tried running in.

They named him ‘Rossco’.

Rossco was then taken to Cooma Caravan Park to be assessed by our animal coordinators.

He was weighed and found to be 5kg, underweight for his size and dehydrated, in addition to attack wounds on his back.

Since being in care, Rossco is recovering well, gaining weight steadily. His wounds are healing. He has a couple of ‘buddies’, and will be in care for about a year, or until he reaches about 17kg and shows signs of independence and maturity.

Rossco’s rescue is testament to the perseverance of our two volunteers, Heather and Ross. Their commitment and dedication to finding Rossco goes above and beyond what is possible usually, given the time and availability of volunteers.

It is also clear that Rossco is a clever little wombat and was using burrows with very small entrances, where other bigger wombats could not go.

This situation of orphaned wombats like Rossco is not uncommon. Their rescue is rare.

When checking dead wombats, and an elongated teat is found, often it is not possible to do the sort of extensive search that Ross and Heather did. People may live a long way from where the wombat was found. Sometimes the joey will come to the dead mother and sniff her, but will stop going back after a couple of days. Usually these young joeys do not survive, either dying of starvation or attacked by other wombats.