Meet ‘Baz’, an elusive orphaned wombat who was on the run for 13 days after first being seen on the Barry Way at Moonbah on 5 August by a local family.

The rescuer, Mick, was described on the LAOKO Facebook page as a local firie, and does in fact work with NSW Fire and Rescue, but people would also know him as Michael Kowalewski, relieving principal at Jindabyne Central School. Mick and his wife Melissa and family reported Baz to LAOKO because they were worried Baz was too small to be on his own. And they were right to be concerned.

Not yet weaned, Baz should have been with his mother. Weighing only 3.5kg and about 8 months old, he would not have survived on his own. Wombats are weaned at between 7 and 12 kg but remain with their mothers often until about 24 kg.

Wombat joeys leave their mother’s pouch at around 3 kgs, but are still drinking milk and are ‘at heel’, rarely breaking contact with their mother.

Melissa said she and her husband and daughter would regularly see Baz out and about between West Lynne Road and the Barry Way, but he ran away and was too fast to catch. 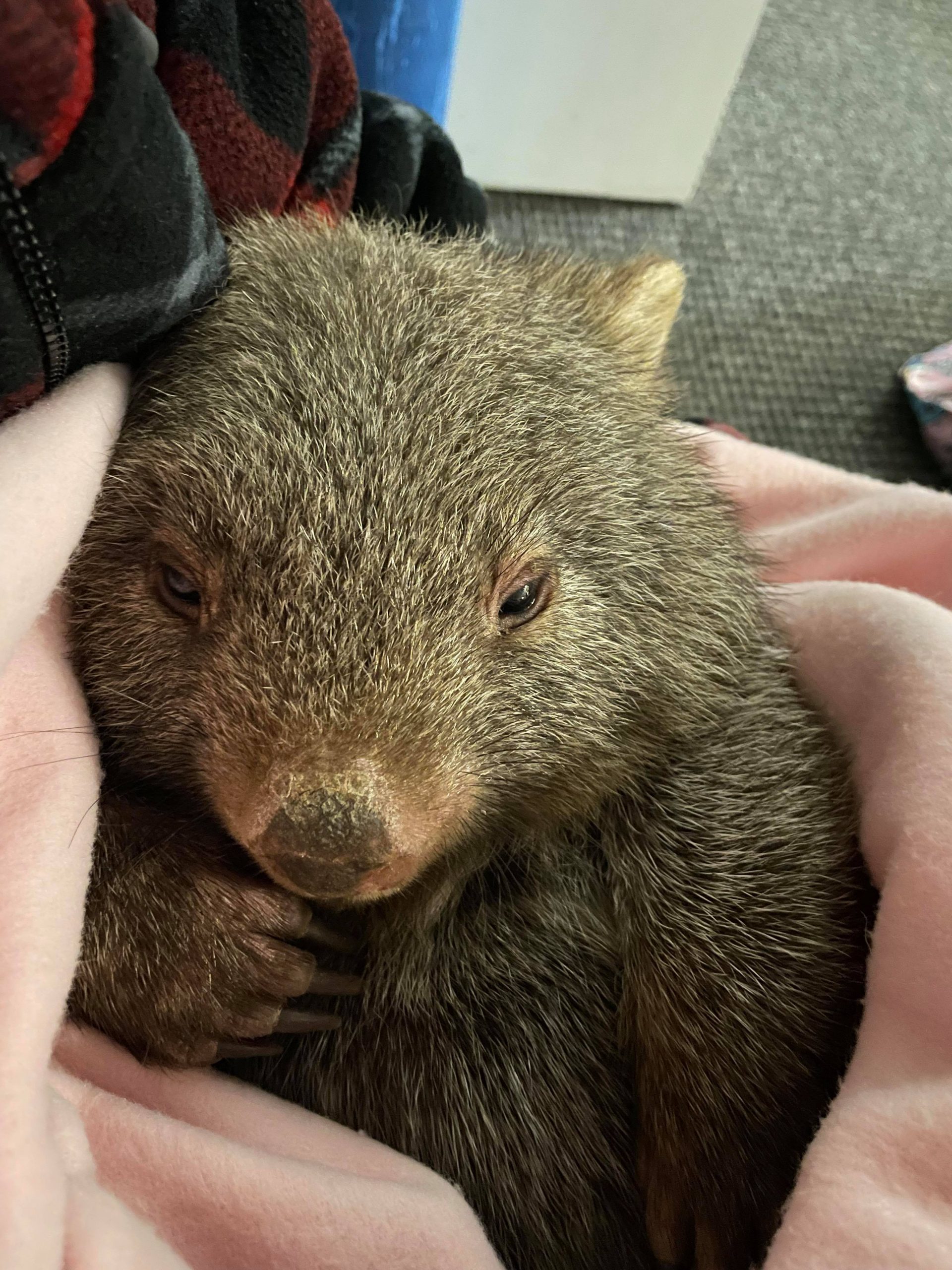 Baz on the day of his rescue (5 August), after 13 days on the run… finally safe and sound in care. Photo: Jenna Vdv

LAOKO launched a search and rescue effort with volunteers including Laura Vagne, Jenna Vdv and a number of locals conducting regular drive-bys to see if they could find him and bring him into care.

Thirteen days since first noticing Baz, Mick spotted him sitting beside the road and was able to catch him easily. Baz had deteriorated noticeably from when he was first seen: he was quite weak and did not try to run away.

Mick brought him to LAOKO member Jenna Vdv, who then took him to experienced LAOKO carer Bec Owen to look after overnight until he could be taken to the vet for assessment.

Baz is now with a trained and experienced LAOKO wombat carer Rebecca Cowan, who has four other wombats around the same size to keep him company.

Rebecca said Baz was pretty wild and took about five weeks to settle in with his new buddies. Baz will remain in care for about 18 months or until he is about 20kg when he will be released back into the wild.

All up, about 15 people were involved in Baz’s search and rescue, transport, and assessment before he came into care: a real team effort!

So where was Baz’s mother? It is a mystery, if she was killed by a car, she was nowhere to be seen. One possibility is that his mother had mange and may have died of mange and gone down the burrow to die. Baz has the early stages of mange, and would have got it from his mother. Another possibility is that she was hit and injured by a car, and also went into the burrow. But we will never know. For now, he is in great care and on his way to recovery.

Photo at the top: Five weeks on, Baz has settled in nicely with his LAOKO carer, Rebecca Cowan and two of his new ‘buddies’. Photo: Rebecca Cowan